We all want more velocity in our release paths, especially in agile environment where developers are pushing applications more often. There are many pieces that come in play in making those paths into highways to production – one of the key ones is automating tests.

For .Net teams, the good news is that Visual Studio 2012 provides a very good solution for automating test with Microsoft Test Manager.

The better news is for .Net teams using both Visual Studio and InRelease! We have just added a simplified – as much as these things are simple – way of integrating Automated UI Tests created in Visual Studio in a deployment managed by InRelease. 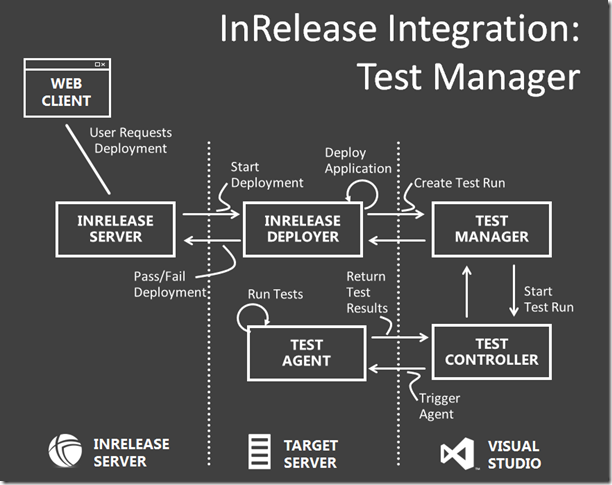 In a nutshell, once you have your automated test suite created, you incorporate running them as part of a regular InRelease deployment - which is essentially a series of coordinated actions that InRelease performs on the target server. In version 2.8 we added out-of-the-box actions that trigger a MTM test run that will get executed on the target server by MTM’s own agent, and will pass the results back to InRelease that will then continue the deployment, or not!

The way this was implemented is interesting in three ways:

1) We leverage MTM standard mechanisms so that you use standard features to go analyze your test runs, making no difference whether it was triggered as part of a deployment or not.

2) The test results are passed back to InRelease as success, fail or inconclusive to decide whether or not the deployment continues.

3) We leverage our existing integration with TFS2012 making the configuration very easy to do.

We are pretty excited about this new feature!