InCycle software is excited to announce the flagship public release of our core Azure DevOps Accelerators. The motivation for these extensions are to provide Infrastructure-as-Code, in the form of pipeline tasks, that can rapidly provision and configure Azure resources. This approach has been extremely successful in many engagements and we would like to share them with you, to enable your success.

The extensions provide the Build/Release Pipeline tasks to provision Azure resources to support web based applications. With the included tasks you can create a Release Pipelines that provisions, on demand, the Azure Resources needed for an environment with Azure Web App that is monitored  by Application Insights and uses Cosmos Document DB for the back-end data-store.

Core Accelerators in this extension:

Using the tasks in this extension:

This is and example release pipeline with the Accelerator tasks: 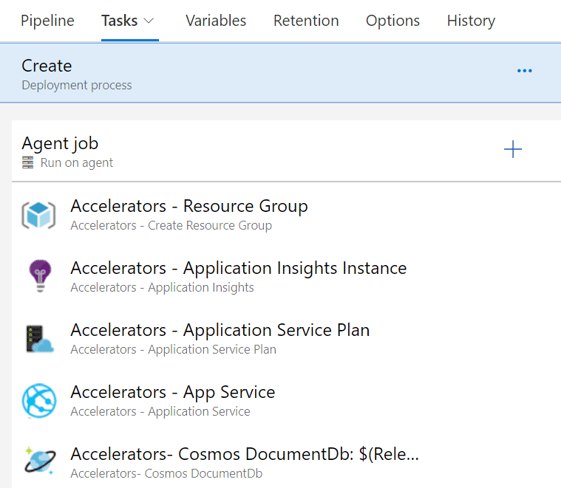 Note: using release pipeline variables "Variables give you a convenient way to get key bits of data into various parts of the pipeline. As the name suggests, the value of a variable may change from run to run or job to job of your pipeline. Almost any place where a pipeline requires a text string or a number, you can use a variable instead of hard-coding a value. The system will replace the variable with its current value during the pipeline's execution." (Read how) InCycle DevOps accelerators come with suggested variables already build in to most tasks. To use them simply add them to the Variables tab of the release pipeline and set their values for your environment.

Step 3: update the input variables and/or create the release pipeline variables listed below and set their value to your unique values.

Example of pipeline variables with values

Step 4: Save and run the release pipeline. The pipeline tasks will create an environment in Azure with the values specified. You can view the newly created resource via the Azure Portal.

In addition to the above Accelerators, many more are available core from our website. Complete your collection of InCycle DevOps Accelerators and take your company to the next level!

Since 2002 we have delivered 1000s of projects --- helping customers achieve new levels of success. Our team of DevOps experts, Microsoft MVPs and Cloud Architects, have developed countless Accelerators (i.e., reusable code, snippets, scripts, tasks, frameworks etc.), that support modern development and cloud practices. The purpose of this site is to share our experience, accelerators and provide community support.

InCycle has assembled a series of Azure reference architectures. These architectures are an excellent resource to accelerate your cloud app implementation. Most include a deployable solution to get started quickly --- and on the right track!