I was recently working with a client to help them customize some of the work item types in Azure DevOps Services. If you’re familiar with Azure Boards, then you probably know there are many options to customize the product to fit how your organization develops software. For those that are unfamiliar, Microsoft has two primary ways to customize the work item experience in Azure DevOps. The first is called the inheritance model and is customized completely within the confines of the GUI and comes with very little overhead. The second, older model, is an XML file-based system whereby customizations are performed by exporting a project’s process template (a collection of XML files that describe how the project behaves), modifying the files by hand, and then reimporting them into the system, replacing what was there. The XML model allows for more customizations than the inheritance model but comes with more responsibility. Because it’s effectively coding, it has many, if not all the concerns that you would typically have when doing development. The user must make some decisions like:


As part of our customization work, we proposed to help them reduce the complexity and overhead of maintaining their process templates by bringing modern DevOps practices to bear and automating the entire process through an Azure Pipeline based CI/CD. They were enthused.


We outlined the following basic development process – a user would make changes to the process template and commit them to the develop branch in source control. The commits would trigger a pipeline that would deploy the changes to a test project within Azure DevOps. A user would then test that the changes made within the test project to make sure that they operate satisfactorily. When all changes were done, develop would be merged with the master branch. This would trigger a deployment to Azure DevOps and replace the production process template. Now, we could (and did) add more to this process – feature branches, pull requests, etc., but this is it at its most basic. There are five main parts to the solution which I will present briefly.

To make sure that every change could be tracked, and any missteps could be rolled back, our first step was to establish revision control. Process templates export from (and import to) Azure DevOps as a zip file. When unzipped it looks like Figure 1. 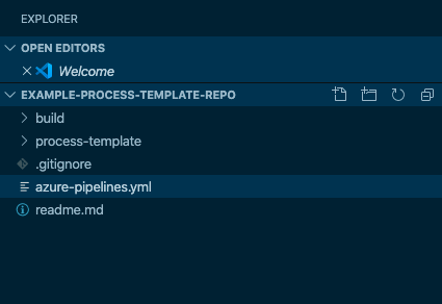 Once the repo was established, I set out to create the resources needed to test any changes made. In order to test template changes without overwriting the production process template, it’s necessary to first create a copy. Azure DevOps identifies a Hosted XML process using a GUID which is stored in the type attribute on the <version> element within the ProcessTemplate.xml file. When a process template is imported, Azure DevOps checks the GUID to see if this is an existing template or not. If it is existing, and the user has indicated they wish to overwrite, the process template is imported and replaces the one with the same type. If the user did not indicate they wished to overwrite, the import halts. Since I didn’t want to overwrite production, it was necessary to change the type to a different GUID. I generated a new one and replaced the value in ProcessTemplate.xml. I also modified the template name so that it would be visually distinguishable in the UI.

Once these changes were made, the template was imported, and the test project was created.

All calls to the Azure DevOps API must be authenticated. There are a variety of means with which to do this but the simplest is to use basic authentication using a Personal Access Token, or PAT. I am not going into creating one because Microsoft already has a great article on it.

Once source control and the test environment were set up, it was time to flesh out the deployment process. There were several things that the pipeline needed to accomplish

The source code in Figure 4 is an excerpt from an Azure Pipeline similar to the one I developed for the client.

The trigger section along with the pr section specify what will trigger the pipeline. In this case, commits to the YAML file, or to the build or process-template directories in either the develop or master branches will trigger. Likewise, submitting a pull request to the develop branch will also trigger. By including a branch and PR trigger to develop, facilitates development both directly on develop or using feature branches like in a GitFlow scenario.

For my processing logic I chose PowerShell Core and psake. This was almost entirely personal preference and there is nothing to stop someone from choosing a different stack e.g., Node, Python, etc. Azure Pipelines support a huge range of technologies. The deployment process was for the most part simple. I am going to focus on two parts and gloss over the rest.

The first part I want to mention is deploying from develop. Because deployments from develop should overwrite the test version of the process template and not our production version, some replacement needs to be done. As I detailed in the Test Environment section, the type attribute of the <version /> element needs changed as well as the <name /> element. My process looked at the branch that triggered execution and if it matched develop, would replace the type and name to match the test version before the files were zipped.

The second part I want to highlight is calling the Azure DevOps API. The calls I needed to make are undocumented. Because I’ve been working with Azure DevOps for some time, I’ve learned that I can use the developer tools in the browser to peer behind the curtain. Watching network traffic, I determined there were two calls I needed to make. The first, uploaded the archive file via POST to the following URL:

The second posted an object with the GUID of the process template to query for completion of the import process:

The result of this query is an object with a PercentComplete property. I wrote PowerShell to simply loop until the property read 100 (or failed a set number of times) and would either log success or log failure and the returned error message to the pipeline.

When deploying modifications to the template, Microsoft states that the version number in the ProcessTemplate.xml file should be incremented. I am not a fan of version numbers within source files and certainly not trying to modify them in concert with changes. There are all sorts of technologies that do this, PowerShell module manifests, Node’s application.json, etc. I see it as an anti-pattern. To me, the version control system and deployment system should control version numbering. Instead of requiring users to modify the <version /> element in concert with other changes, I added GitVersion to the pipeline. GitVersion uses tags, commit messages, and branch information to calculate a deterministic version number i.e., given the same inputs it will always generate the same version number. It’s very flexible and can accommodate a wide range of workflows. When the pipeline executes, PowerShell queries GitVersion for the major and minor version numbers and modifies the attributes accordingly before compressing and uploading the process template. This ensures that the template is always versioned consistently.

In this post I briefly covered Azure DevOps work item process models with Hosted XML process templates in particular. I also covered some of the challenges in managing Hosted XML processes and how one can go about simplifying the process using DevOps automation. I hope it was informative.

Thank you for reading!